The delightful quaint territory of Pondicherry houses many tourist attractions such as the Botanical Gardens that were opened in 1826 and houses a variety of rare and exotic plants and an aquarium. One can also see local methods of coastal fishing here. The Government Park is a well-planned one with lawns, flowerbeds and fountains situated in front of the Raj Niwas, the residence of the Lieutenant Governor. Tourist Attractions, Sightseeing in Pondicherry, Pondicherry Attractions, Pondicherry tourist Spot,Pondicherry Tourist Attractions It is said that the park is located at the site of French Fort Louis, which was destroyed in 1761 by the British. Park Monument or Aayi Mandapam standing at its center is built in Greco-Roman architecture during the reign of Napoleon III-Emperor of France. This monument has an interesting story attached to it. Aayi, a 16th century courtesan felt guilty when a passing king saw the candle-lit residence and mistook it for a holy place and wandered to her place.

the lady that she razed down her home and replaced it with a reservoir. Some 300 years later, it served to quench the thirst of Napoleon's men. When Napoleon heard of the story, he decided to built a monument as a tribute to Aayi. The 2.88m tall Statue of Dupleix was erected in 1854 the honor of Francois Dupleix, an able governor whose rule ended in 1754, over six carved ornamental granite pillars.Tourist Attractions, Sightseeing in Pondicherry, Pondicherry Attractions, Pondicherry tourist Spot,Pondicherry Tourist Attractions The 18th century Place Du Gourvernement is a brilliant example of town planning in Pondicherry and houses Raj Nivas and the old tribunals. Today it is home to the Legislative Assembly of the Union Territory too. Its highlights are the Water Monument commemorating the introduction of good drinking water for the population and exquisitely carved monolithic pillars brought from the Gingee Fort in 1751.

The 19th Century Light House was once a guide to the early seafarers to Pondicherry atop the Red Hills (Gorimedu), which was illuminated for the first time on I July 1836. It is no longer in use since the commissioning of the new lighthouse in 1979. French War Memorial, Goubert Avenue, often referred to as the 'Beach Road' by the local people, is an elegant tribute to the uniform and gets prettily illuminated annually during a solemn ceremony on Bastille Day that falls on 14th of July. The statue of kindly and heroic John of Arc in marble is laid out in front of L'Eglise de Notre Dame des Anges. Sri Aurobindo and Mother established one of the highly popular tourist attractions, Aurbindo Ashram in 1926. During his 40-years in Pondy, Sri Aurobindo who began the practice of Yoga in 1905 developed a new system of mind development and named it as Integral Yoga. Madame Mirra Richard, a French painter-sculptor, popularly known as 'Mother' here, joined him later. It highlights the flower-decked marble 'samadhi' and men and women meditate with their eyes fixed on it. The pin-drop silence here offers peace and soothes our nerves.

4 km from Pondicherry, Ariyankuppam or Arikamedu is known for the archeological excavations revealing local trade with Romans as early as 2nd century BC and also some of the ancient Roman settlements. One can also see the ruins of an 18th century French Jesuit Mission House here abandoned in 1783. The French Cemetery at Karaikal has some curious headstones with catchy inscriptions along with an old, tiny chapel. Ananda Ranga Pillai Mansion was once home to Ananda Ranga Pillai, the celebrated official of Dupleix, the then governor of Pondicherry during the times when the French rule was at its zenith. Pillai's diaries have been a good source of information on 18th century French India and his mansion is one of the oldest surviving buildings on the west side. Its architecture represents a curious blend of French and Indian styles.

Out of so many tourist spots in Pondicherry, Paradise beach is one of the most visited places. Situated 8 km from the town of Pondicherry, the riveting appearance of this beach lures the people from all walks of life to put a stamp of their footsteps here. The fact that it is much cleaner than the other beaches over here makes it the most preferred place to visit. The presence of dolphins is one of the highlights of this beach. The 1.5 km long promenade running along the beach is the pride of puducherry. There one can relax or take a stroll at any time of the day. On the sea front are several land marks. The War memorial cold and dispassionate throbbing the memory of last dreams, the statue of Joan of Arc blazing an inspiration, the heritage town hall, the statue of Mahatma Gandhi standing tall, Dupleix statue, old light house, the remains of the old pier, the old customs house, speak the splendor of the by gone era. The well furnished tourist information centre is situated in esthetically heritage building facing the sea to cater to the need of visiting tourists. The Sri Aurobindo Ashram located on rue de la Marine, is one of the most well known and wealthiest ashrams in India, with devotees from India and all over the world flocking to it for spiritual salvation. Its spiritual tenets represent a synthesis of yoga and modern science. It is open to the public daily between 08-1200 hrs and 1400-1800 hrs. Children below 3 years of age are not allowed into the ashram and photography is allowed only with permission of the ashram authorities. The Ashram was set up in 1926 by Sri Aurobindo Ghose, one of India’s greatest philosopher-poets, who originally came to Pondy to escape persecution by the British. It was after arriving in puducherry, that he was drawn into the spiritual realm and discovered the power of yoga. His philosophy deeply rooted in yoga and his writings inspired a number of followers. 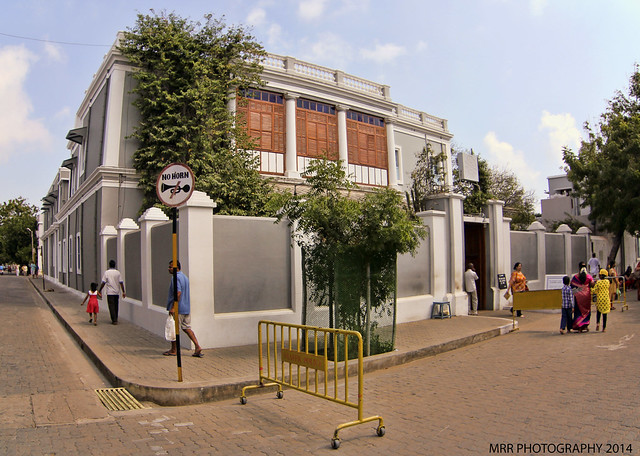 Located around 10km north-west from Pondicherry, Auroville or the “City of Dawn” was conceived by the Mother as a human unity. The idea is to build a futuristic city where people of goodwill can live together in peace and progressive harmony, above all creeds, all politics and all nationalities. The puducherry Museum is located on Saint Louis street and is open on all days except Mondays and national holidays between 1000-1700 hrs. The museum is located in the former Law Building. The museum has a collection of rare bronzes and stone sculptures from the Pallava and Chola dynasties and artifacts excavated from Arikamedu.

The French War Memorial on Goubert Avenue is solemn reminder of those brave soldiers who laid down their lives, for their country during the First World War. Every year on the 14th July (Bastille Day) the memorial is beautifully illuminated and homage is paid to those brave martyrs. Located on Mission Street (or Cathedral Street), this cathedral, which bears a strong resemblance to a church in France, was built in 1791 in the place of a former church. In front of the church is a statue of Our Lady with the infant Jesus in her arms. Ananda Ranga Pillai was the celebrated dubash of Dupleix, the governor of puducherry while it flourished under the French glory. Pillai's compilation of diaries serve as a storehouse of information on the 18th century French India. His mansion, completed sometime in 1738, is one of the oldest surviving buildings on the west side - then known as "natives' quarters".Its architecture represents a curious mix of French and Indian styles.

This beach is a ten minutes drive to the north of the town. This virgin beach, with its serene surroundings is an ideal place to laze away your day.

The Auroville Beach as the name indicates is close to Auroville. It is right off the ECR, opposite the road leading to Auroville. Located around 12 kms from the main puducherry town, its shallow waters and small waves make it an ideal place of swimming. It is a fairly popular destination on weekends. On weekdays it is relatively less crowded.

Subramanya Bharathi (1882-1921), Bharathiyar to all, was a Tamil poet-patriot who arrived in puducherry in 1908 a fugitive from British India. The Free French air brought the best in Bharathi and some of his finest patriotic and romantic compositions were born here. Bharathi's home also known as Bharathi Musuem, on No. 20, Eswaran Dharamaraja Koil Street, is almost a place of pilgrimage today for the Tamil people.

The Bharathidasan Museum, on No. 95 Perumal Koil Street, is the former house of the renowned puducherry born poet and playwright - Bharathidasan (1891-1960) (meaning "Disciple of Bharathi"). Bharathidasan's poems compare with Bharathi's in literary achievement and poetic fervour. He also wrote scripts for films on issues such as Dravidian culture and the rights of women.

13Basilica Of The Sacred Heart Of Jesus

Located on Subbayah Salai, this white and brown neo-gothic church is one of Pondy’s finest Catholic churches. It was built by French missionaries in the 1700’s in a contrasting Neo-Gothic manner, with towers flanking a central gable and stained glass windows on the side. The church has an imposing entrance and the beautiful stained glass panels depict incidents from Jesus Christ’s life. Further along the southern boulevard is the cemetery which has some interesting tombs with ornate marble decorations.

Located on M.G.Road, this is believed to be the oldest temple in town, dating back to 600 AD. The temple built in the typical Dravidian style, complete with brightly coloured ‘gopuram’ and sculpted pillars, is probably the oldest standing structure in puducherry. This temple is dedicated to Vishnu. Legend has it, that the temple was originally built for the idols of Rama, Sita, Lakshman and Hanuman, which were brought to the present site by fishermen, from the sea. The main deity here is Venkatachalapathy (Vishnu). Right behind that is a separate shrine for Narashima (who is also an avatar of Vishnu).

The Botanical Garden is located south of the New Bus Stand. The Botanical Garden was opened in 1826. The gardens have a variety of rare and exotic plants, beautiful flowers, pruned trees, gravel lined paths, fountains and an aquarium. With over 1500 species of plants, this could actually be qualified as one of the best botanical garden in South India.The gardens also have a musical fountain which is active in the evening time during the week end.

A small museum located next to the Botanical Gardens, it has a good collection of snail shells from the puducherry region.

Located next to the old lighthouse on Goubert Avenue, the museum is open on all days except Monday. This rater unusual museum has a collection of over 120 dolls, each one dressed in costumes from different Indian states. Also on display is a little ‘fairyland’ with a tiny Ganesha watching over all the proceedings.