Beauty is defined in many forms and figures in the cultural land of India. One of the best known forms of beauty that exists in India is the emerald backwaters. The backwaters that define beauty in its calm, serene and tranquil ways is found only in the naturally beautified state of Kerala. The state of Kerala is located on the southwestern part of India and is one of the most visited places of the country. Most of the travelers like to visit this place mainly due to the emerald backwaters that flow through the state as the tranquil aura along with beauty projected by them are unmatched by any other place in the world.

The backwaters in Kerala with its emerald colour flowing in a winding path under canopies of lush green trees, cutting through the land creating deltas and small islands is a sight that will bring sheer delight to your heart. The tranquility with which they flow along the banks laden with palm and coconut trees, children that wave to you as you pass by, sights of farmers and laborers working, melodic songs of the birds hidden in the canopy of trees, the sunlight breaking through the gaps of the trees, the soft sound of water being cut by the oars that power your houseboat forward all add to the magic of a cruise along these enchanted emerald backwaters.

The beauty and charm of the Kerala backwaters is such that the place has been named as the “Venice of the East”.The backwaters that flow through the region has carved out eye pleasing geographical features worthy of praise. Some of the best known backwater destinations that adorn the state of Kerala are:- 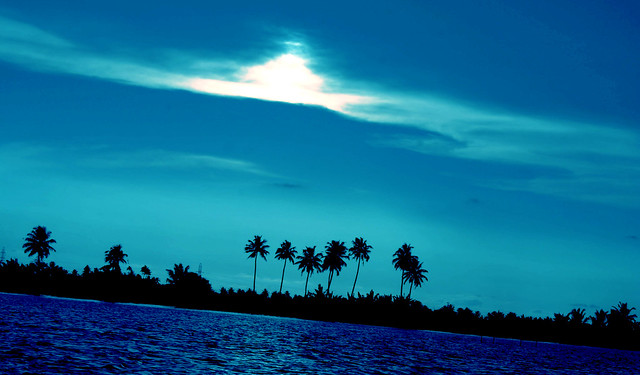 If you are cherishing the idea of spending some good time amidst the sights and sounds of the hydrosphere, then step into a country boat and wind through the labyrinth of canals in Alappuzha. While cruising through these canals, one would come across the many interesting aspects of day-to-day life on land and water.A wide range of cruise options are available here - from small country boats to luxury houseboats and small speedboats to big passenger motorboats. Small boats are preferred for cruise through the canals.

It is the major rice granary of Kerala, where vast stretches of verdant paddy fields are interlaced with enchanting backwaters create some of the unforgettable sights.Kuttanad, the rice bowl of Kerala is all about an agrarian community, striking a chord of harmony with its physical setting. Noted for its farming below sea level (about 4 to 10 feet) the land of Kuttanad possesses a socio-cultural fabric of its own. Four major rivers in Kerala viz. Pampa, Meenachil, Achankovil and Manimala flow into the region.

The village of Kumarakom is a cluster of little islands on the Vembanad Lake, and is part of the Kuttanad region. The bird sanctuary here, which is spread across 14 acres is a favourite haunt of migratory birds and an ornithologist's paradise. Egrets, darters, herons, teals, waterfowls, cuckoo, wild duck and migratory birds like the Siberian Stork visit here in flocks and are a fascinate the visitors.

Alumkadavu is where the first houseboats in India were built. Located north of Kollam district, the waft of coir and wood is always in the air of this village. And the reason: It is a major centre for the construction of kettuvalloms (traditional rice barges) which are later modified into houseboats for travellers.

So called because of its 8 arms or channels, Ashtamudi Lake is the gateway to the backwaters. This 16 km long lake is the second largest in Kerala, finding its way into the sea through the Neendakara estuary. The District Tourism Promotion Council (DTPC) Kollam provides boat rides as well as houseboat cruises. The trip between Kollam and Alappuzha is one of the most popular and longest backwater cruises in Kerala. The eight-hour journey will give you an intimate experience of the famed waterways. Catch a glimpse of one of the many splendours of Ashtamudi backwaters. As the boatman gently dips his paddle, without disturbing the prevailing calm, the ripples spread out gently in the shimmering golden hue of the sun.

Situated near the confluence of the Payaswini River and the Arabian Sea, the Chandragiri Village is known for its large 17th century fort built by Sivappa Naik of Bedanore. The Chandragiri Fort, one among a chain of forts built by the same ruler, perched atop a hill is in ruins now. But the location offers a breathtaking view of the convergence of the river and the Arabian Sea. The place is a vantage point to watch the sunset from the ancient Kizhur State Temple at Chandragiri, which celebrates the annual festival called Pattu Utsavam. Chandragiri is situated 4 km from Bekal.

Green and beautiful, a little effaced by the historic Bekal Fort and beach, Chithari is still a virgin destination. The island is accessible only by boat, often wooden canoes that belong to the locals. A part of the Bekal Tourism Project, this backwater area has all it takes to ome a mega tourist destination. Chithari is located 7 km from Kanhangad.

In Kannur, an inspiring stretch of water body Kavvayi Kayal could perhaps be your next, most fascinating destination among the backwaters in Kerala. The backwaters down the south of Kerala; like those in and around Kollam and Alappuzha have their own unique attractions, surroundings and ways of life. Kavvayi Kayal too has its own unique elements that could easily make you fall in love with it.

Essentially a fishing hamlet, this tiny village facing the Kochi backwaters in the western part of the city is India’s first designated ecotourism village and the first rural tourism village of the state. Kumbalangi Integrated Tourism Village project is a unique initiative to transform the tiny island as a model fishing village and tourism spot. Here at the Kumbalangi Tourism Village one can fully savour a variety of natural splendours, and ecological balance of the location. The model village, the first of its kind in the country is located near the port city of Kochi in Ernakulam District. It is a veritable treat to its visitors with the famous Chinese fishing nets and many other sights to savour.

Marine Drive in Kochi, is a popular hangout and this scenic stretch offers a spectacular view of the backwaters and the Kochi Harbour.Shopping malls, cinema halls, restaurants, cafés and supermarkets line the drive. The Rainbow Bridge and the International Tourism Boat Jetty Complex are other attractions here.

Much of the popular backwater attractions of Kerala are located in the southern and central parts of the State. Contrary to this belief, Footnotes, this month takes you to a serene backwater network in the northern most district of Kerala - Kasaragod. Here adjoining the backwaters of Valliyaparampu lies a beautiful backwater village of Thekkekadu, which has an inspiring story to share with its visitors. It is all about Padanna's crusader in self-employment, Mr. Gul Mohammed and his backwater retreat - Oyster Opera at Padanna.

Pathiramanal, a small island on the backwaters of Alappuzha, is a haven for hundreds of rare birds migrating from different parts of the world. You can reach there after 1 1/2 hours drive by motor boat or 30 minutes by speed boat from Alappuzha in south Kerala. Surrounded by the Vembanad Lake, stretching from Alappuzha to Kochi and the Kayamkulam lake, Pathiramanal is accessible only by boat.The green island thus forms an ideal place for a break in the journey while on a backwater cruise.The mainland Alappuzha has a vast network of lakes, lagoons and fresh water rivers criss crossing it and is a district of immense natural beauty.

Located in the sprawling 200-year-old Guest House campus where Lord Munroe once stayed, this tourist village at Ashramam along the backwater front, is the main centre for recreational activities in Kollam. The place has a boat club, a children's traffic park and Tamarind Hotel in addition to an adventure park. The Paaramparya Museum in the same premises has on display paintings from different parts of the country including Warli, Kalamkari and Madhubani as well as Kerala mural art. It is located 1 km from Kollam city.

A delightful getaway surrounded by the Anjengo backwaters, this uninhabited isle is accessible by boat from the makeshift jetty at the nearby Nedunganda Village. A 100-year-old Shiva-Parvathi Temple, rebuilt a decade ago, is also situated here. Ponnumthuruthu Island is just 10 km away from Varkala, the famous tourist destination in Thiruvananthapuram, Kerala.

Situated in Kuttanad popularly known as the rice bowl of Kerala, QST & R Block Kayals (backwaters) remind the visitor of the famous dikes of Holland. A striking example of the indigenous agricultural engineering know-how, here cultivation and habitation are made possible at four to ten feet below the sea level. For this purpose extensive land has been reclaimed from the backwaters and is protected by dikes built around it. A leisurely cruise along the canals here is a memorable experience.

Sasthamkotta, situated about 29 km from Kollam town, can be rightly called the 'Queen of Lakes'. This vast fresh water lake flanked by hills on three sides is the largest of its kind in Kerala. The ancient Sastha Temple, which lends its name to the town, is an important pilgrim centre. This temple dedicated to both Lord Ganesha and Lord Ayyappa is surrounded by hills and forests, and the monkeys inhabiting the premises are considered holy. The monkeys of Sasthamkotta are believed to be the faithful entourage of the ruling deity, the Dharmasastha and therefore they have a spiritual ambience about them. The monkeys are devotee-friendly, and the thousands of devotees visiting the temple take pleasure in feeding these monkeys with nuts and fruits.

Kannur is that part of the legendary Malabar Coast where King Solomon's ships anchored to collect timber to build the 'Temple of the Lord' and to secure most needed spices. Here in the little hamlet on the banks of the river Valapattanam, is a giant of the modern timber industry - Western India Plywood Ltd., the largest wood-based industry in South East Asia.

Located 30 km from Bekal, Valiyaparamba in Kasaragod district of Kerala, is perhaps the most scenic backwater stretch in the state. Fed by four rivers and dotted with numerous little islands, Valiyaparamba is fast turning into a much favoured backwater resort that offers enchanting boat cruises.

Kottayam is a vast network of rivers and canals which empty into the great expanse of water called the Vembanad Lake. The lake, an enchanting picnic spot and a fast developing backwater tourism destination, provides boating, fishing and sightseeing experiences that are truly exhilarating. The Kumarakom Tourist Village offers houseboat cruises and holiday packages. The serene lake comes alive during Onam with a spectacular water regatta - the snake boat races. It is indeed amazing to watch oarsmen, at least a hundred in one boat, slice their way through the waters to the fast rhythm of their own full throated singing.

Named after Lord Willingdon, a former British Viceroy of India, this man-made island is surrounded by beautiful backwaters. The island is the site of the city's best hotels and trading centres, the Port Trust and the headquarters of the southern naval command.