Himachal Pradesh is a tiny hill state whose pleasant summers make it a popular holiday resort. The Raj still lingers in Shimla, the state capital and former summer capital during British rule. Kullu-Manali are neighbouring resorts, surrounded by pine covered hills and lush meadows Himachal is an ideal place for trekking enthusiasts, and the trekking routes in the state take you to remote, undisturbed spots. Himachal Pradesh is also a popular site for winter sports. Courses and competitions in skiing and mountaineering, carnivals, cultural evenings and open air skating facilities form the traditional part of winter sports. Recently added attractions are hand gliding and river rafting. 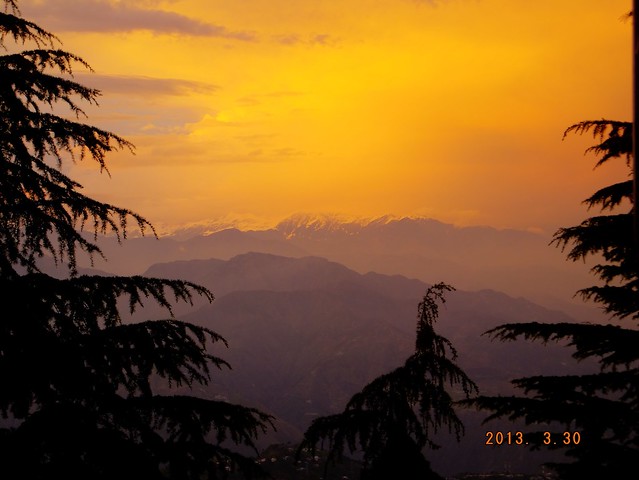 Dalhousie (2036 m) is a hill station full of colonial charm that holds lingering echoes of the Raj. Spread out over the five hills (Kathlog, Potreys, Tehra, Bakrota and Balun) the town is named after the 19th century British Governer General Lord Dalhousie. It was popular with the British Army personnel in 1860's. The town’s varying altitude shades it with a variety of vegetation that includes stately grooves of pines, deodars, oaks and flowering rhododendrowns. Rich in colonial architecture, the town preserves some beautiful churches. St. John church is the oldest one built in 1863, St. Francis was built in 1894, St. Andrew in 1903 and St. Patric in 1909.

With all its intricacies, history seems to have been the mortar for every brick and stone that has built Shimla. As the summer capital of British India for well over a century it was the seat of one of the most powerful governments in the world. From its cedar-shaded heights, one fifth of the human race was ruled and the decisions made those decades ago affect our lives to the present day.

Just 40 kms away from Kullu to the north, Manali is situated near the end of the valley on the National Highway leading to Leh. The landscape here is breath taking. One sees well-defined snow capped peaks, the Beas river with its clear water meanders through the town. On the other side are deodar and pine trees, tiny fields and fruit orchards. It is an excellent place for a holiday, a favorite resort for trekkers to Lahaul, Spiti, Bara Bhangal (Kangra), and Zanskar ranges. From temples to antiquity, to picturesque sight-seeing spots and adventure activities, Manali is a popular resort for all seasons and for all travellers.

The historic town of Mandi (800 m) is built along the banks of the river Beas. It has long been an important commercial centre and the sage Mandva is said to have meditated here. This one time capital of the princely state of Mandi is a fast developing town that still retains much of its original charm and character. Today, it is a district headquarters. Mandi is renowned for its 81 old stone temples and their enormous range of fine carving, it is often called the 'Varanasi of the Hills'. The town has remains of old palaces and notable examples of 'colonial' architecture. The temples of Bhutnath, Trilokinath, Panchvaktra and Shyamakali are among the more famous ones. The week long international Shivratri fair in Mandi is the major attraction of the area every year. In the year 2013 the fair was celebrated in March. In the fair the activities like cultural programmes in the evenings, exhibitions, sports etc. attracts the tourists as well as locals.

Formerly the seat of the ruler of the State is now submerged in the Gobind Sagar,it was situated on the south east side of the Satluj. Bilaspur Township is situated just above the old town of Bilaspur at an height of 670 m. above sea level. The new Bilaspur Township can be truely described as the first planned hill town of the country. The pleasure of a visit will be enhanced manifold when a motor launch is preferred as the means of travel, gliding through cool and enchanting waters of the lake.The Nalwari or annual cattle fair is held at Bilaspur for four or five days in March / April, the occasion is marked by wrestling and other amusements. Cattle are brought from Nalagarh and neighboring parts of Punjab. For accommodation, Himachal Tourism's Hotel Lake View and pvt hotels are available at Bilaspur.

Una has been carved out of Hoshiarpur district of Punjab in 1966 where the hilly areas of Punjab were transferred to Himachal Pradesh and the whole area is warm. It has borders with Kangra Hamirpur and Bilaspur and then acts as a gateway to these regions. Efforts are being made to develop same places in Nangal and Bhakra areas.

This is another area situated at lower elevation and comparatively warmer but has some hilly ranges covered with Pine forests. These hills can be developed for trekking and camping during winter months. This district was made in 1972 by carving it out from the Kangra district. It is well connected by roads from all sides and thus can be promoted as a tourist destination by developing some historical and religious places. At present the known attractions are Deot-Sidh, Temple of Sujanpur Tihra and Nadaun. Hamirpur town is the Headquarter of this District, which lies on Shimla-Dharamshala road.

The town of Chamba, the district headquarter of Chamba district is situated in the western Himalayas between north latitudes 32°10' and 33°13' and east longitudes 75°45' and 77°33'. The town stands on a plateau on the right bank of the Ravi river valley between Dhauladhar and Zanskar ranges south of the inner Himalayas. This town was founded by Raja Sahil Varman when he conquered the lower Rani valley from the petty chiefs called Ranas and Thakurs in the beginning of 10th Century. It seems the original name of the town was Champa as mentioned in Kalhan's Rajtarangani. In the bansauli or genealogical rolls of the Chamba Rajas a reference occurs of place which was adorned with highly fragrant Champaka trees and guarded by Goddess Champavati or more popularly known as Chameshni. The temple was built by Sahil Varman in the honour of his daughter Champavati who is worshipped as a goddess in Chamba. Champavati temple became the family temple of the ruling family.

The most charming and beautiful Kullu valley spreads out its charm on either side of river Beas. The valley runs north to south of this river and is 80km long and about 2km at its broadest. Yet with awe inspiring glens and mossy meadows encircled by the rushing streams and meandering brooks, flung east & west, a fairly wide area is open to the tourists, the trekkers, the mountaineers, the artists and to anyone who wishes to escape the heat & dust of the plains to breathe the exhilarating air of the Himalaya and enjoy the spectacle of the variegated mountain scenery. The valley is also famous for its exquisitely woven colourful hand made shawls and kullu caps.

Blessed with a pleasant climate all the year round. Solan is a district headquarter and has the famous temple of Shoolini Devi and from Solan the Jatoli village (15 km) and the temple of Lord Shiva and on Rajgarh road the Buddhist Monastery (18 km) may be visited. Known as the "Mushroom city of India" Solan has an old brewery (11 km) and a sprawling horticulture and forestry university at Nauni (16 km). HPTDC hotel at Barog and other pvt hotels & restaurant are available at Solan.